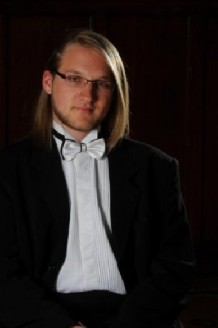 He is one of the most respected pianists of the young generation. Piano lessons began at the age 4 years with such distinguished professors as: Ida Leszczyńska, Wiera Nosina, Wiktor Mierżanow, Andrzej Jasiński i Tatiana Shebanowa. A year later he began to study composition. In 1992, he made his debut of solo program in the Great Hall of the Peter Tchaikovsky Conservatory in Moscow. He started his career at the age of six, when he went as a soloist for concert tour across Japan with the Sinfonia Varsovia under the direction of Volker Schmidt-Gertenbach. Since then he has performed in Japan repeatedly by giving recitals and symphonic concerts. With Yomiuri Nippon Symphony Orchestra (dyr. A. Lazariev, T. Numajiri), St.Petersburg Symphony Orchestra (dyr. A. Anikhanov) as well as with Brno Philharmonic Orchestra (dyr. Petr Altrichter) he performed the piano concerts of Chopin, Rachmaninow and Tchaikovsky.
In 2000 he received the Grand Prix at the 10th Eurovision Song Contest in Bergen, whose finale was watched by ca. ten million viewers and in 2008 he became a laureate the 4th  International Piano Competition named after Sergei Rachmaninov in Moscow.
He has appeared in the concert halls of Amsterdam (Het Concertgebouw), Bergen (The Grieg Hall), Bruxelle (European Parliament), London (Victoria & Albert Museum), Madrid (Palacio Real de El Prado), Moscow (Great Hall of the Peter Tchaikovsky Conservatory), Porto (Palacio da Bolsa) and Tallina (Estonia Hall). Vienna (Schönbrunn Palace). He inaugurated such prestigious events as: the Europalia 2001 in Belgium, the Days of Poland in 2002 in Austria, the concert season in Basel, Festival of the French Radio in Montpellier or else Festival of the Danish Radio in Copenhagen.
26 January 2003 Stanisław Drzewiecki  made his debut in the most prestigious concert hall of the world - New York's Carnegie Hall (Isaac Stern Auditorium)  by achieving a great success. The young artist he went on tour with the Wroclaw Philharmonic across the United States, Podlasie Philharmonic - across Belgium, and with the Silesian Philharmonic and the Orchestra "Hanseatica" - across the Netherlands. He has performed in China and at many stages in North America i.a in Vancouver (Queen Elizabeth Hall), Edmonton (Winspear Centre), Guadalajara (Teatro Degollado), Mexico (Palacio de Bellas Artes) as well as in Atlanta, Chicago (Symphony Hall), Philadelphia (Kimmel Center), Los Angeles (Walt Disney Concert Hall), Miami (Gusman Hall) and in New York (Lincoln Center).
The artist has recorded eleven CDs, SACD and DVD issued by record companies in Poland, Japan, USA and Germany. One of them - Romantic Piano Recital, released by Sony Classical granted the status of "golden CD". For the latest recordings of the young pianist include the following consolidations: Shostakovich's Concerto No. 1 with trumpeter Jens Lindemann and I Palpiti Los Angeles Chamber Orchestra under the direction of Eduard Schmieder at the Walt Disney Concert Hall in Los Angeles (jajla Classic), Mozart's concertos for 1-2-3 pianos  with the Sinfonia Varsovia under the direction of Michael Zilma (Polish Radio) and Bach concerts for 1-2-3-4 pianos Avenna Concerto under the direction of Jerzy Maksymiuk (Hänssler Classic).
Stanisław Drzewiecki also passionates about composition. In 1999 presented in TVP (Polish Television) the Waltz in A minor in variant for 2 pianos with jazzman Adam Makowicz and Prelude "Insect" in the final of the 10th Eurovision Song Contest in Bergen. Many pieces he dedicated to the violin. He composed the Fantasia in E minor, Theme and Variations VIII, Ballade in D-flat major, Sonata No. 1 and Double Concerto for violin, piano and string orchestra. In 2003 he wrote a music for the theater play "The Olch King" by Goethe's ballad for the Theatre "Lalka" in Warsaw. The show received the main award at the International Theater Festival in Poznań.